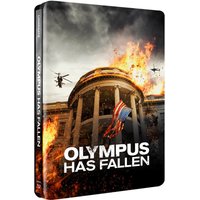 Gesamtpreis: € 28,48
Zavvi Exclusive Limited Edition Steelbook - 4000 Only.When a group of heavily armed and meticulously trained extremists launch a daring daylight ambush on the White House, the President (Aaron Eckhart, The Dark Knight) and his staff are taken hostage inside an impenetrable underground bunker.But as the Oval office and its environs sustain an aerial and ground attack, a disgraced former U.S. Secret Service agent, Mike Banning (Gerard Butler,300), finds his way into the besieged building to do the job he has trained for all his life: to protect the president - at all costs.With tension rising, the Acting President (Morgan Freeman, The Dark Knight Rises) and US national security team must rely on Banning to rescue the President before the terrorists can unleash their ultimate, terrifying plan.From visionary director, Antoine Fuqua (Training Day),Olympus Has Fallen is an electrifying, and inspired action thriller that will keep your heart pounding from start to finish!