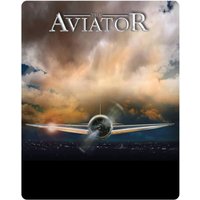 Gesamtpreis: € 40,48
Zavvi Exclusive Limited Edition Steelbook With Embossed Title Treatment and Gloss Finish. Ultra Limited Print Run. This Product is Limited to 2000 Copies.Nominated for eleven academy awards and winning five, including Best Supporting Actress for Cate Blanchette (Blue Jasmine, Lord of the Rings). 2004 film The Aviator, directed by Martin Scorsese stars, amongst others, Leonardo DiCaprio, (The Talented Mr Ripley, Wolf of Wallstreet ) and Cate Blanchett (Blue Jasmine, Lord of the Rings ) in the true story of aviation pioneer Howard Hughes (Dicaprio).A successful film producer and aviation magnate, Hughes was at the time one of the wealthiest men in the world. With a bold vision of the future, he lived his dreams to full, taking an array of beautiful and glamorous women along with him for the ride. Believing nothing could stop him, he simultaneously began to grow more unstable as his severe obsessive-compulsive disorder started to take hold.