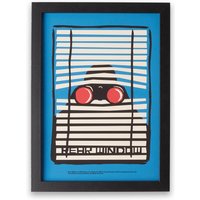 Gesamtpreis: € 40,48
Widely regarded as one of the Masters of Cinema, Alfred Hitchcocks career spanned six decades, in which he directed upwards of 50 films with many of them regarded as iconic classics in their own right, setting the style and fundamental rules still used today in horror, thriller and many other genres. Given the nickname The Master of Suspense , Hitchcock became just as famous as the actors he used, due to his commanding personality, frequent interviews and span as a presenter. His films are critically acclaimed and have been referenced, remade and used as inspiration in countless works since his initial releases. He truly is the Master of the silver screen. Our ranges bring together some of the most iconic imagery across his famous works, celebrating the skill and determination he brought across his award-winning career.Grab one of our outstanding Giclee prints today, produced on Premium Matt Coated 230gsm paper, these prints are of the highest quality. Our prints come hand rolled to en