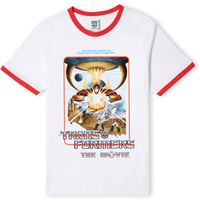 Gesamtpreis: € 20,98
Zavvi has collaborated with the awesome Matt Ferguson, Transformers fan and Box Art creator, to produce a custom-made range exclusive to Zavvi! Including clothing, exclusive prints and more! Be sure not to miss out on this incredible range.Experience the ultimate Transformers adventure with the new Transformers x Matt Ferguson collection at Zavvi. Designed by Sheffield based Graphic Designer, Artist and biggest Transformers fan, Matt Ferguson, the new Transformers 1986 range celebrates the animated Transformers: The Movie based on the classic television series. Matt is the co-founder and Creative Director of Vice Press and is well known in the industry for his beautifully stylised creations for established Film and TV properties. He is best known for working with Marvel Studios & Disney, including designing artwork for Marvel’s WandaVision and official Star Wars promotional posters, as well as designing the new, exclusive art for the Zavvi Transformers: The Movie (1986) Steelbook.Get r