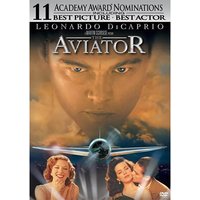 Gesamtpreis: € 13,98
Fast-paced biopic documenting the life of one of the most colourful Americans of the 20th century, Howard Hughes. Leonardo DiCaprio plays Hughes, the son of a Texan inventor who dies and leaves him with a small fortune. Hughes moves to Los Angeles to become a Hollywood film producer and produces such classics as Hells Angels, The Front Page and Flying Leathernecks. He also becomes involved in the aviation industry, designing new planes, setting air speed records and flying around the world risking his life testing aircraft. As his ideas become bolder, his approach becomes more eccentric, and he gains many powerful enemies.