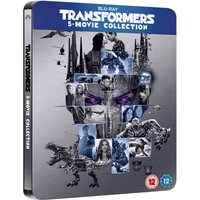 Gesamtpreis: € 66,98
Disc 1- Autobots and Decepticons are at war, with humans on the sidelines. Optimus Prime is gone. The key to saving our future lies buried in the secrets of the past, in the hidden history of Transformers on Earth.Disc 2- Autobots must escape sight from a bounty hunter who has taken control of the human serendipity: Unexpectedly, Optimus Prime and his remaining gang turn to a mechanic, his daughter, and her back street racing boyfriend for help.Disc 3- The Autobots learn of a Cybertronian spacecraft hidden on the moon, and race against the Decepticons to reach it and to learn its secrets.Disc 4- Sam Witwicky leaves the Autobots behind for a normal life. But when his mind is filled with cryptic symbols, the Decepticons target him and he is dragged back into the Transformers war.Disc 5- An ancient struggle between two Cybertronian races, the heroic Autobots and the evil Decepticons, comes to Earth, with a clue to the ultimate power held by a teenager.