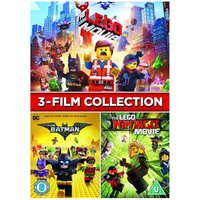 Gesamtpreis: € 18,48
The LEGO® Movie - The first ever full-length theatrical LEGO movie follows Emmet (Chris Pratt), an ordinary, rules-following, perfectly average LEGO minifigure who is mistakenly identified as the most extraordinary person and the key to saving the world. He is drafted into a fellowship of strangers on an epic quest to stop an evil tyrant, a journey for which Emmet is hopelessly and hilariously underprepared. The LEGO® Batman Movie - In the irreverent spirit of fun that made The LEGO Movie a worldwide phenomenon, the self-described leading man of that ensemble - LEGO Batman - stars in his own big-screen adventure. But there are big changes brewing in Gotham City, and if he wants to save the city from the Jokers hostile takeover, Batman may have to drop the lone-vigilante thing, try to work with others and maybe, just maybe, learn to lighten up. The LEGO® NINJAGO Movie - In the battle for NINJAGO City, Lloyd (Dave Franco), high school student by day and Green Ninja by night, gets thrown