Aviation At War - B17 Fortress Of The Sky In Wwii 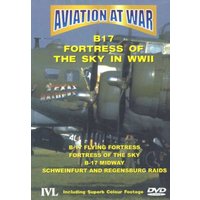 Gesamtpreis: € 12,48
B-17 Flying FortressThough the Americans had various other bombers in World War II, without doubt Boeings B-17 Flying Fortress is considered The Bomber Of The War. Rugged, stable, easy to fly and capable of taking much battle damage it was universally loved by its crews and widely recognised by the public for its vital war roles.The three separate films on this DVD aim to convey some of the unique characteristics of the B-17 At War and its essential contribution towards victory.Fortress Of The SkyThis is a rarely seen film specially made for the Boeing Aircraft Company. It traces the early development of the B-17, its production processes, USAAF development and eventual combat action. The colour quality is very good and this makes the air sequences stunning. All, a well crafted filmed introduction to a most important aircraft.B-17 MidwayThe battle of the Midway is generally considered the most significant engagement of the pacific. Theatre of War.US victory here turned the tide and sto