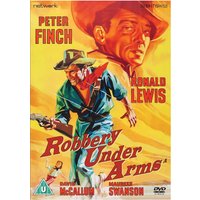 Gesamtpreis: € 14,98
Following the huge critical and commercial success of A Town Like Alice, this 1957 Australian western reunited Oscar winner Peter Finch and British director Jack Lee. An adaptation of Thomas Alexander Brownes classic novel charting the exploits of notorious nineteenth-century bushranger Captain Starlight, Robbery Under Arms sees Finch heading an impressive cast that includes Jill Ireland, Ronald Lewis and David McCallum. Partly filmed on location in Australia, Robbery Under Arms is presented here in a transfer from original film elements in its as-exhibited theatrical aspect ratio. During the mid 1860s, brothers Dick and Jim Marston are drawn into a life of crime by their ex-convict father Ben and his friend, infamous cattlethief Captain Starlight. Making their way to Melbourne with the proceeds of a recent raid, the brothers meet and romance the Morrison sisters, Kate and Jean, whom they eventually marry; but just as they are poised to start a new life in America, Captain Starlight an